Scarlet-banded Barbet through the eyes of 3

A while back, I received the new Victor Emanuel Nature Tours catalog in my mailbox. Every year I enjoy getting this piece of mail, not because I am keenly interested in going on a tour, mostly because it is so often emblazoned with a beautiful new painting by Larry McQueen on the cover. This year it was a particularly beautiful piece. Scarlet-banded Barbets, discovered on an LSU expedition in northern Peru just a few years ago, a fantastic bird from a fabulous part of the world and existing is perhaps the most beautiful habitat to behold...montane cloundforest. Seeing this painting and admiring it, I immediately also saw an opportunity for a great comparison. I'll get to that next, for now, take a look at this great McQueen piece. I wish the scan came out better, it unfortunately does not do the color justice. but it is the best I can do right now. Incidentally, this painting will also appear on the cover of the new 'Birds of Peru', the forthcoming field guide, started years and years ago by Ted Parker, and marshalled on towards publicatication by his friends and colleagues, Tom Schulenberg and John P. O'Neill. I have heard that the book will be out very soon, (field guide first, plates and maps, detailed species descriptions to be published later in a second volume). 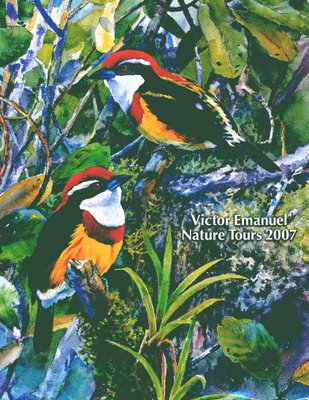 When I saw the McQueen painting and had this idea for a comparison, I tracked down a clipping from Audubon magazine from the late 90's when the Barbet was discovered. John O'Neill has coordinated field expeditions for LSU for decades and is renowned for his ability to pick little known, potentially ornithologically rich patches of the globe for investigation. This skill has helped O'Neill discover and or describe a whopping 13 species of birds new to science in the past 40 years. The most recent, 13th discovery was on the 1996 LSU Northern Peru expedition. In this Audubon magazine description of the expeditions events and successes, O'Neill painted new species number 13, the Scarlet-banded Barbet. 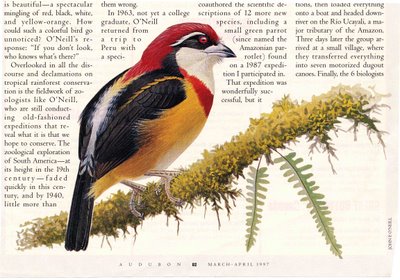 The third painting in this comparison was published on the cover of the Auk in 1997 as a frontispiece in the Scarlet-banded Barbet description. Dan Lane, an artist/ornithologist from LSU was a member of the 96 expedition and was the first to encounter this new species. Here is Dan's painting from the Auk. In a later post, I will reprint a great account that Dan wrote of his discovery. 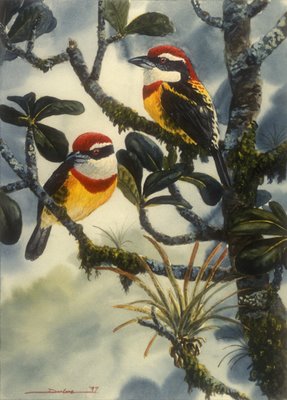