As promised, here is the same plate as published in Birdlore in ~1904 and later in Chapman's Warblers of North America. 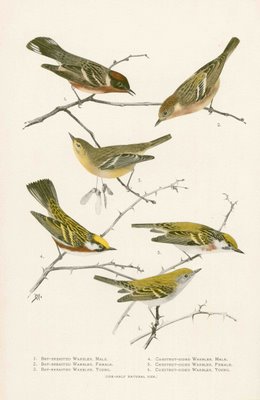 When I realized there was a discrepancy between the Fuertes plates and Horsfall's, I shifted my interests squarely onto the 4 Fuertes originals. I dug a bit more into Horsfall and his career, learning a bit about his life in this 'Biography' . I had suspicions that the auction house was indeed aware of the fact that these paintings were actually not painted by Fuertes. Selfishly though I focused my attentions on the auction for the plates I was most interested in.
As I wrote in an earlier post 'scroll down from here' , on the day of the auction, luck was not on my side and all of the plates that I bid on crept out of my price range (Bidding via telephone was a real thrill though!). Afterwards, after I actually heard the auctioneer attributing the Horsfall plates to Fuertes, I felt I had to pass on what I knew. I sent them a letter reading...

Dear...
I participated in the auction of several original bird paintings a few weeks ago. Since then, I have confirmed my suspicions about some of the pieces that were up for auction. All lots 155, 156, 157, 168, 169, 170 were published originally in 1903 in a series of articles in the early Audubon Society publication Birdlore, and then again in a book by Frank M. Chapman called 'The Warblers of North America' in 1907. Two artists contributed paintings for both of these publications, Fuertes of course, but also an artist named Bruce Horsfall. Lots 157, 168 & 169 appear to me to have been painted by Bruce Horsfall, not L. A. Fuertes. Look for the BH monogram.
You may be aware of this already. If so, please disregard. I thought I would share a bit of my research into these works, especially in case you were not aware of this apparent discrepancy.

A while later, I received this very short, rather unsatisfying response...

Dear Mr. Clock,
Thank you for the information and participation in our auction.
Sincerely,
...
I still am not sure what the gallery's next step was, but it certainly would have been nice to have been informed. Check and double check provenance is the take home message. I do know that AskArt.com currently lists the Horsfall's in the recently auctioned Fuertes paintings section that you have to pay dues to view.

Stay tuned in a later post for some new and interesting tidbits I unearthed while digging back into Birdlore Volumes 1-10 starting in 1899.

For Fun, here is the first Fuertes piece ever published in color in Birdlore, again derived from a grayscale plate, colorized during the printing process. 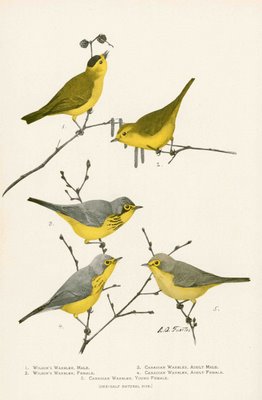