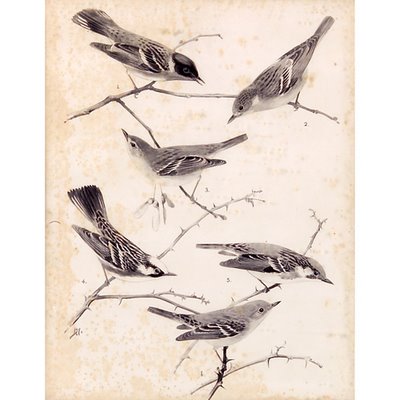 Robert Bruce Horsfall a bird painter living and working in the late 1800's to the early-mid 1900's created a series of plates for Frank M. Chapman's Warbler guide. Here is one of this plates in it's original form. In the early 1900's printing capabiities didn't allow for full color work to be reproduced for print, at least not in mass production. Plates were painted in gray scale, and in some cases limited color was added later. Note the BH monogram in the lower left side of this plate. I came upon these Horsfall plates through a curious avenue. About 2 years ago, I happened upon an auction for an original Francis Jaques plate. I poked around a bit on the auction site, and then thought to double back to the catalog of the entire auction. Here I found the jackpot, a series of six plates of warblers, ALL attributed to Louis Agassiz Fuertes...ALL Original works. Excitedly, I inspected the photos, I fired off an email to the auction house to request higher-res scans and I dashed up to the library to try and track down where they might have been published. All the while I was a bit suspicious of the strange monogram on some of the plates. Why would Fuertes sign some of the plates and monogram others, especially so differently? At this point, I had lower-res images to scrutinize, but I knew that I could make out the first letter in the monogram as a B, not and L. At the library, my first thought for publication of the plates was Birdlore. Many of the early issues of Birdlore from the early 1900's were beautifully adorned with facing page plates by LAF. I flipped through the bound Birdlore pages and found the first very easily...in color surprisingly. In the next post, I will wrap this story up with the curious resolution of this apparent LAF and Horsfall confusion and in the meantime, I will grab a scan of one of the print-tinted Horsfall plates.
To be continued.
Posted by bmclock at 10:47 AM