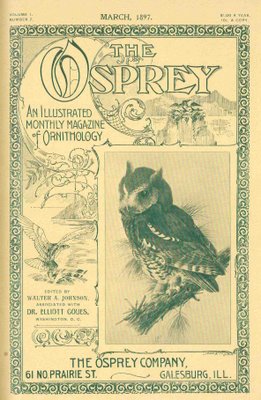 After Fuertes had won the attentions of Elliot Coues, one of the premier ornithologists of the late 1800's, he received a showering of inquiries from the rest of the community. Impressed with Fuertes's paintings, Coues had showcased Fuertes work at the AOU in 1895. He told him in a letter, "I brought your name prominently before the American Ornithologist's Union by exhibiting about fifty of your best paintings and talking about them". This lead to one of the best early opportunities for Fuertes from Walter Adams Johnson who had recently launched a new ornithological magazine called "The Osprey". Fuertes was first published there, on the cover in 1897. Here is the cover with a Fuertes's grayscale painting of Eastern Screech Owl. 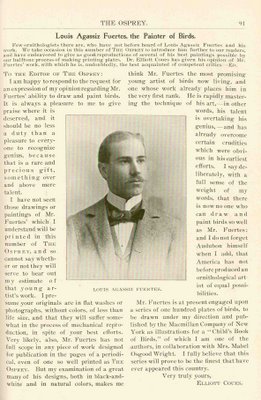 The attention received here and interest in his talents, while still such a young man, undoubtedly did wonders for establishing Fuertes as a sought after artist amongst the ornithologists of the day. Soon Fuertes's talents would win him bigger, higher priority jobs, all this while still a busy undergraduate at Cornell.
Posted by bmclock at 2:04 PM