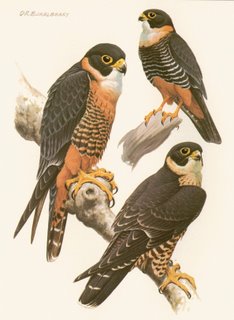 This painting is a plate from Brown & Amadon's Eagles, Hawks and Falcons of the World. Eckelberry painted a series of beautiful portraits for this two volume series, along with several other artists including Albert Earl Gilbert, Guy Coheleach and a few others whose plates are not as notable. Eckelberry's style is quite a bit different than the work I normally gravitate towards, being that most of his work is opaque. I have very strong connection to translucent media like watercolor. By no means would I ever downplay Eckelberry's incredible talent as a painter, however, I think his true strengths were in his abilities to so skillfully render his birds in acurate anatomical detail, always in realistic, often diagnostic and usually intensely interesting poses and postures. Eckelberry drew what he saw in nature, he developed a composition from field sketches and tranferred those to canvas. Some of the most impressive renderings of his I have seen are those directly from his field sketches. A bird portrait by Eckelberry always conveyed the uniqueness of the species but more importantly, the nuances of an individual at a moment in time, just as it had perched before him in life.
Posted by bmclock at 3:42 PM