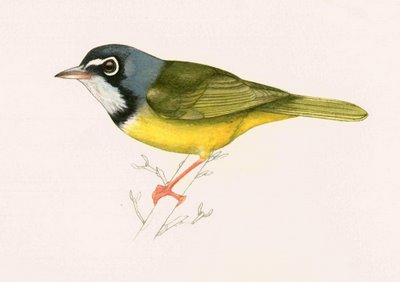 A few weeks ago, I began tracking down resources and planning for a painting to appear in the Living Bird magazine. This painting is to accompany an article on the discovery last spring of a hybrid Parulid which was netted in western New York by David Junkin. You can check out some photos of this species and read the details about the capture at David's mystery warbler site.
With it's mosaic of characters, this bird was NOT identifiable to species. Photos were taken to attempt later ID and feathers were collected for genetic analysis. The photos were sent out to the ID Frontiers listserve where various accomplished birders from around the country tossed in their two cents about the identity of this bird. It was very quickly determined that the bird was most likely a hybrid, but of which two species? Dr. Irby Lovette at the Cornell Lab of Ornithology and his lab set out to make this determination leaning heavily on their labs extensive work on Parulid genetics from the past. In the Living Bird article, the Junkin's Warbler will be presented just as it has been to me... unidentified. Readers will be given their own opportunity to make a determination in the form of a contest. Take a look! Which two species does it look like to you? In the spring issue of Living Bird, and I presume on the Cornell Lab of Ornithology home page, you'll find an opportunity to share your opinion.
The image below is a composite of various stages of the painting in progress. One of the interesting things about this piece was working from just a handful of photos of a bird in the hand with various characteristics clear in some and blurry in others. I began with a sketch of a generic Parulid, purposely choosing a posture that was not meant in any way to be diagnostic. Once the posture was finalized, I transferred the sketch to watercolor paper using tracing paper by darkening the back side with graphite and retracing over the outline, rubbing a ghost image to the thicker watercolor paper. In this case, I used 300lb Arches cold press. Next I painted the outline of the bird in very light neutral tint watercolor and then moved on to the wing. To get the proper highlights in the wing I employed many, many layers, beginning with light yellow and slowly adding the darker olive greens of each feather group, slowly blending as I went. The head, beak, body tarsus and foot and tail, all progressed very quickly finishing with the birds eye as I always seem to insist on. There is something very satisfying about bringing the bird 'to life' at the end of the painting process by painting the eye.
One last detail. As I alluded to earlier, I am not privy to the 'answer' to the puzzle of which two Parulid species are the parents of Junkin's Warbler. The authors wished for my eye to remain unbiased so that the true identity would not unconciously shine through influencing the painting one way or another. I remain very intrigued by the mystery and look forward to the upcoming contest and unveiling in a few months. Is there anyone who might be able to help me understand the edition size of Fuertes lithographs from his Abyssian Expedition? Recently, I was given six lithographs:
Sand Grousse
Gray Headed Kingfisher
Swallow Tail Kite
Helmet Shrike
Black Shouldered Kite
Cape Teal

There are two markings in pecil on the back:
1227
and the other
09344
I want to know if anybody would have information about these picture.

This is a gorgeous drawing of this rare bird. Well done.

Canada and??? Have you already done the reveal? If not, could you enlighten me?

Excellent read. I like your style...have a good one!/Nice blog! Keep it up!